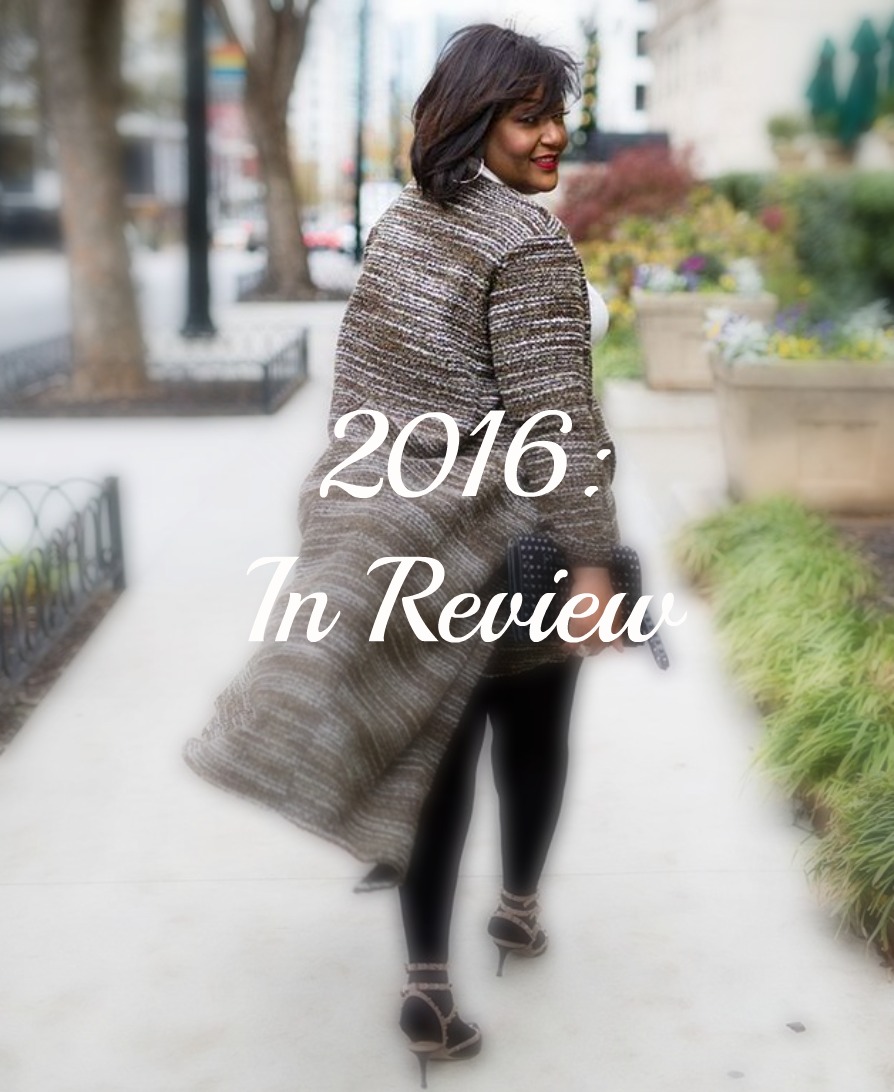 2016 has been a great year for NikkiFreeStyle! So many exciting things happened for the blog, and for me personally, in regards to fashion, style and expanding the NikkiFreeStyle brand. So here is a look back at the year in review!

I got the opportunity to work with one of my top three plus size fashion brands on a few occasions in 2016, I styled and did some personal shopping for a few clients, moderated a plus-size empowerment panel, served as a sponsor for three plus-size industry events, solidified relationships with some veteran bloggers and saw significant improvement in my own personal style. Here is a look back on this year of NikkiFreeStyle.

Join me on this walk down memory lane …

In January, my pals over at Redbook published an amazing feature all about me being a (former) corporate executive and curvy fashionista defying the antiquated and rudimentary fashion rules. What a way to kick off the New Year! Click here to read the full article. In February, I celebrated the one year anniversary of NikkiFreeStyle! My very first full year of blogging was definitely a labor of love, but an oh so rewarding one. The blog’s actual “birthday”is February 15, the day after Valentine’s Day, so what better way to celebrate than to paint the town red. When Marie Denee, The Curvy Fashionista, announced earlier in the year that she would be hosting a series of empowerment brunches, starting in March 2016, I not only wanted to attend, I decided I also wanted to be a sponsor. Why? Because I so believed in what Marie was doing: empowering curvy and plus women through one thing that connects so many of us — Fashion.

Also in March, Ashley Stewart invited me to host a Sip & Shop in-store event where I got to meet and greet shoppers, take pics with NikkiFreeStyle followers, and offer style tips. And what is SHOPPING if you can’t bring your girlfriends (and fellow fashion bloggers) along? Hey Maui & Marie!

And then this happened! Did you happen to catch me on the Macy’s billboard in Times Square in April? Yep, that was me wearing a dress by Rachel Roy from her collection at the department store! That’s huge! Mama, I made it! LOL! 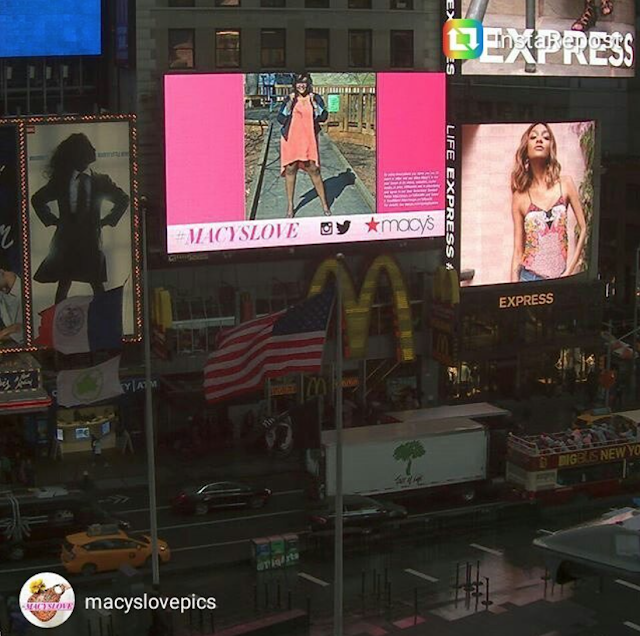 In May, I got that opportunity to attend the exclusive launch of Vivica A. Fox’s collaboration with Poetic Justice Jeans (thanks Marie). The clothes were just ok, but Vivica was beautiful and vibrant and very engaging. I also finally got the chance to meet some veteran plus bloggers that I followed on social media years before launching NikkiFreeStyle. It was a great night!

If you have never been to Full Figured Fashion Week, what are you waiting on? Easy for me to say, considering I attended my very first one this past June. I also sponsored and moderated the Styling Curvy panel that featured guest panelists independent designer Tyrell Holmes and industry stylists Meghan O’Connor & Steffany Allen. It was well attended (designers from Target’s plus size line Ava & Viv were in the audience) and lots of important styling and fashion information was shared. I didn’t do a lot in July as I had been running nonstop the previous six months. I did however attend the beautiful baby shower of one of my favorite independent plus designers, Jasmine Elder of JIBRI (jibrionline.com). And how do you NOT where JIBRI to a JIBRI event, right?

In August, I moderated and sponsored The Business of Plus Size Fashion panel during The Curvy Fashionista’s TCF Style EXPO. It was an awesome discussion, and well attended. The entire expo was a great networking and shopping event! I also partnered with Fashion To Figure to sponsor the Kurves & Karoke night out. A great time was had by all. 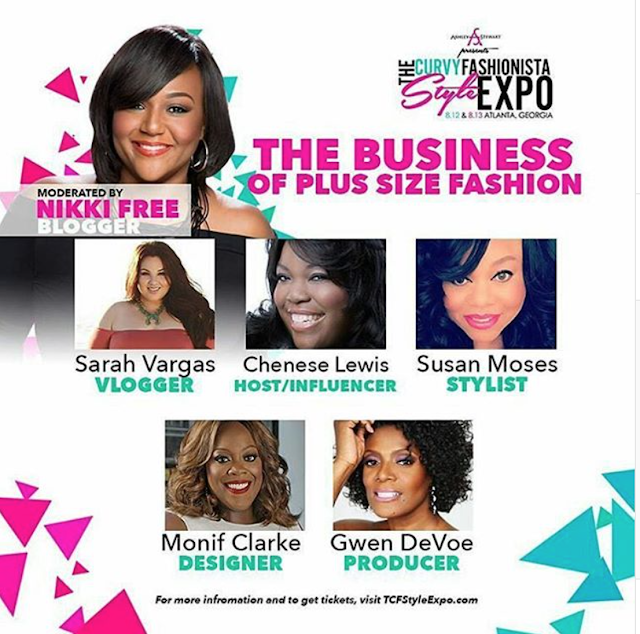 The last eight years have FLOWN by, especially if you are a big fan of President Barack and First Lady Michelle Obama. I just love them, but I digress. Being the political junkie that I am and realizing that this would be his last Phoenix Awards speech as POTUS, I decided to attend the 2016 Congressional Black Caucus Annual Legislative Conference. Being in the room with all these politicos, as well as the Obamas and Hillary Clinton was just awe-inspiring and a once-in-a-lifetime experience. Here are a few looks from that weekend. Pix In The City

I had some business to attend to in NYC in October and while planning this trip decided to find a local photographer who could shoot some looks for my blog. Myah Jones of mjonesimaging.com, the photographer behind Nakamuli, did an awesome job shooting different looks of me all over Brooklyn. I am still in awe of the photos and the ease in which she directed the shoot. Looking forward to working with her again in 2017. Listen, if you follow my blog or follow me of Instagram, then you know how much I love ELOQUII. My closet is FULL of their designs. My love affair with the brand started way back in 2011 when they were a part of the Limited. When they closed down their site, I, like many other curvy girls, felt like we had lost one of the greatest. Then when they relaunched and changed their entire aesthetic, we all embraced the revival with fervor! I wore ELOQUII in my Redbook Magazine cover shoot back in 2015. Well, when they reached out to me and asked if I would be interested in hosting a private trunk show in Atlanta in November, I absolutely said yes!  Later that very same week, I was back in NYC and was invited to interview ELOQUII’s Creative Director Jodi Arnold live on the brand’s Facebook page. What an awesome opportunity to talk directly with the woman responsible for the revival of a favorite brand in the plus community! Check out the photos from the trunk show and my interview with Jodi here.

I started shooting with a photographer this month and I am just in awe of what Amber Gossett of gossettphotography.com can do with her camera. With both Amber and Markus Moore of BigTime Images, the photographer I have worked with since day one of NikkiFreeStyle.com, in my arsenal, you can expect some new, fresh and exciting looks in 2017. I will even start doing more videos! Stay tuned … That’s my year in review! A special thanks to each an every one of you who follow the blog and have been riding with me since Day 1. I really do appreciate the support! 2016 has been a great year for the blog and I am so very grateful for all the opportunities presented to me this year. Stay tuned for some fantastic things coming your way on NikkiFreeStyle in 2017!